Last week, when staff and church members were finally able to venture out of their own homes and over to Memorial Lutheran in Katy (about 25 miles due west of downtown Houston), they feared what they would find. They had just laid floors in the new preschool building, due to open in October, and word was that flood water from Hurricane Harvey had infiltrated some of the church buildings.

Good news and bad news awaited them on the church grounds. The new preschool had been spared the worst: it has sustained no visible damage. Water was spotted in two classrooms and the front entrance, but this was quickly cleaned up. Contractors will confirm soon whether the new building has any underlying damage. Some of the preschool’s existing furniture was destroyed and will have to be replaced, but the electronics and equipment still seem to be working. 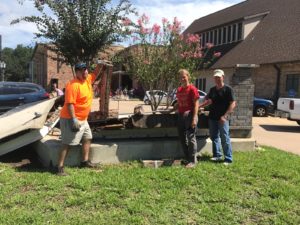 The old preschool and parsonage, however, look to be a total loss. Ryan Legler, the high school director of Christian education, had been living in the parsonage with his wife, Naomi, and two small children. When the flood waters rose, they were evacuated by boat to a local high school and for now are living with another family from the church. (Their belongings have been salvaged from the parsonage and secured in storage units.) In addition, several of the church staff and community members who live in the older section of Katy have seen major damage to their homes. [Learn more about how you can help victims of Hurricane Harvey.]

Memorial Lutheran’s preschool board and staff are currently determining where they will hold preschool classes until the new building is complete in October. One possibility is a temporary Certificate of Occupancy in the new building.

Recovering from Harvey has required a true community effort from the Memorial Lutheran congregation. “Words cannot describe the clean-up event,” says Carol Weaver, co-chairman of the Preschool Building committee. “So many people have worked together in an organized manner to help our church and preschool. It is a living testimony to the people of our church family, the Katy community, and the Texas hospitality that is showing itself all over the city.”

Before the Flood: The Story behind the Preschool That Survived 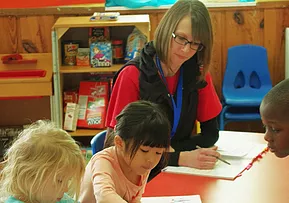 When Memorial Lutheran initially announced plans to construct a larger, dedicated preschool building, the response was overwhelming. Whereas in the past, the preschool program at Memorial Katy had enrolled about 125 children, they began this school year with 178 students, and requests for tours and spots continue to grow.

Considering that the new preschool building isn’t even scheduled to be complete for another couple of months, this is a stunning success. Weaver attributes this success to a strong word-of-mouth campaign about the new building, the preschool’s already excellent educational enrichment offerings, and their extended hours of 6 am–6 pm.

This last feature has been particularly attractive to working parents, many of whom have gone beyond enrolling their children at the preschool and have fully joined the congregation. “We seek to grow the church of God either by adding new members to our church or bringing the unchurched of Katy to a place that is comfortable and inviting,” says Weaver. “Our church family feels strongly this can happen thru the young families of Katy and the mission field in our neighborhoods.”

This boon in numbers has not been without its challenges: while the preschool building is being completed, the staff have had to get creative about how to accommodate the additional students. Preschool director Linda Stahmer came up with a creative solution: temporarily convert the church’s library and nursery into preschool classrooms. Church members visiting the church during the day have been blessed to see “preschool in action”! 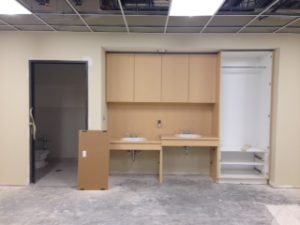 The building project has galvanized the church community in a powerful way. Not only has it elicited generous donations from the congregation, but the number of volunteers at the preschool has increased. “The experience has been nothing short of miraculous,” says Weaver. “This entire building endeavor continues to strengthen our church’s connection to each other and to the Katy community and beyond, with Christ as our center.”

Currently, the construction crew at the new building are finishing the flooring, final painting, and outside entrances. A “Grand Opening/Reformation” is planned for October 29 with a Reformation Cantata involving music from their adult choir, handbells, and children’s choir, followed by a meal together in their new fellowship hall.